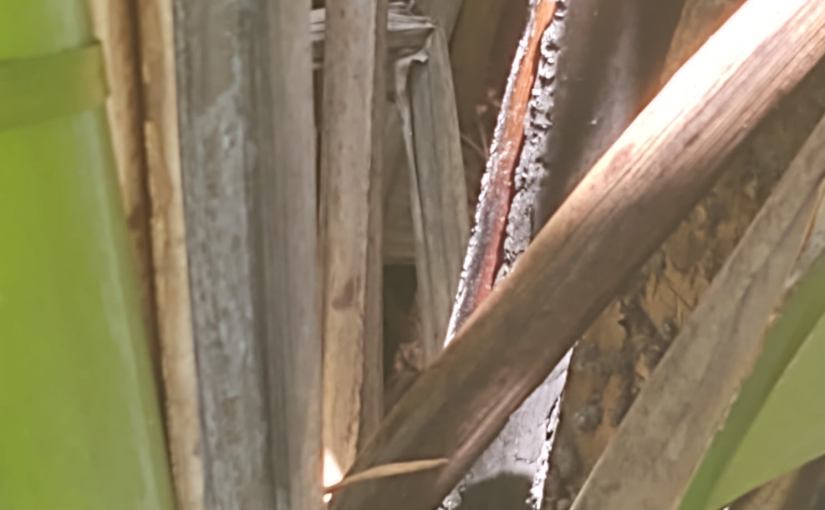 Florida decided to put on a show for my visiting sister one evening last August. Tremendous thunder, lightning and wind knocked down power lines behind our house. The sparks from the falling wires caught our palm tree on fire. I put it out with a hose even while envisioning the headline: “Florida Man Killed Using Hose to Put Out Electrical Fire in a Rain Storm.” Ah, to play an immortal role in the vast network of Florida Man legends. Alas, this time I survived.

We told the power company about the fire and they said, “Um, did you call the fire department?” Well, no… But then we did. No matter, though, since the fire department never showed up at our house (they did show up at a neighbor’s house, it turned out). More classic Florida.

The power company did show up eventually after midnight when we were in bed. Hard knocking in the night. We let the guy into the backyard whereupon he sighed deeply, using a flashlight to examine the tall, unruly bamboo growing around the wires. He didn’t quite call us idiots but I could feel the judgment radiating off him like a fever.

So, they called in a crew and cut our bamboo to pieces as well as cut back our neighbors’ trees. It was ugly. These folks are not landscapers, just being there to make room for new wires. It took a while. We didn’t have power till the next afternoon.

Still, we were grateful they put in so much time so quickly. Those power company crews are have a dangerous, difficult job that requires serious knowledge about potentially lethal electricity as well as the nerve to climb poles and tall ladders while wrestling wire.

But once the power came back on, the Internet didn’t. The cable company robot told us to reboot. It took me a while to get a real person on the phone and tell them it might just be more than a modem problem this time around.

I talked them into sending use a cable guy ahead of the normal schedule. When my wife showed him the situation with the fallen wires, he shook his head. Yeah, this would require more than giving us a new router. Still, I give this dude a lot of credit. He figured it out, climbed a pole and strung new cable all by his lonesome. Though it took him a few hours, we had Internet by the end. Which was great because my hotspotted phone was not quite cutting it.

Anyway, all’s well that ends well, though I’m not sure my sister will want to visit us in August again soon. It should have been my older brother, who lived in Florida once upon a time and is always telling us how much he misses our thunder storms. Well, this one might have cured him.

Meanwhile, we waited for an approaching big storm called Fred to come up our coast, perhaps closely followed by even bigger storm called Grace. I could envision the headlines here, maybe something like, “Grace Kills Praying Florida Man in Collapsing Megachurch.” The fun never stops in the Sunshine State.

I am a writer, analyst, futurist and researcher. I've spent most of my working life as an editor and manager for research organizations focusing on social, business, technology, HR and management trends. But, perhaps more to the point for this blog, I'm curious about the universe and the myriad, often mysterious relationships therein. View all posts by Mark Vickers